It is hard to oversee the Raspberry Pi community’s enthusiasm for the XBMC media center software: no less than three software distributions are available and there are endless forums, tutorials.

No surprise then that I had to try some of them (and decided to stay with Raspbmc) and this became a permanent feature of my TV setup.

There is, however, also an Apple TV in our household, so this is a good opportunity for a feature and usability shootout.

For this test, I looked at the following devices: 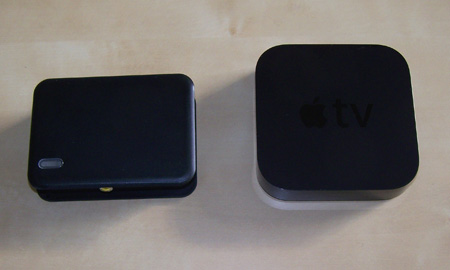 The first category is where Apple’s device can really play all its cards: unpack it, plug in a few cables – maybe enter the WLAN password, you’re done. You really need to try hard to do anything wrong here.

The Raspberry on the other hand provides you with some challenges – nothing that would require professional help, but you should be at least what can be called an “enthusiast”.

To begin with, the Raspberry Pi comes as a plain circuit board, so you need to add a casing. The one I’ve got here (chosen because it appears to be the cheapest on the market) is about as difficult to operate as a lunch box, but still, it adds complexity.

Then you need to get a power adapter. Most mobile phone chargers should work, but then: some don’t; And having to check the specifications (5 V, min. 1000 mA) or compatibility list first may put some people off.

The same with the SD-card: most likely you already have a compatible card in your digital camera, but if you have to buy one, you need to check it against the compatibility list to make sure it works.

Next, choose a distribution: Raspbmc, XBian or OpenELEC. Actually, in most cases the NOOBS image (with Raspbmc) might be the safest choice.

You will need specific software to format the SD-card and unless you use the NOOBS installer also a tool to write the image to the card. The alternative is buying a pre-installed NOOBS SD-card, but it costs a premium and it is hard to see what for.

Finally, if you want to connect the Raspberry Pi to the Internet via WLAN you also need a third party USB WLAN dongle – setting it up is easy, though, or at least not harder than on the Apple TV.

All of this is well documented, there are no really difficult steps, but it all adds to a much more complicated setup than for the other box. It is a lot easier than setting up a typical Linux computer, though.

Apart from the power connector, the Apple TV box has an HDMI port, an optical audio socket and Ethernet. A micro-USB port is present but is reserved for service and support.

It also comes with built-in Wi-Fi support (802.11a/b/g/n) but Bluetooth support is limited to connecting keyboards.

The Raspberry Pi has of course also an HDMI port but also an analogue video output (RCA) and analogue audio.

There is also Ethernet and two true USB ports. There is another micro-USB socket, but it can only used to provide it with power.

Add the SD-card port which is vital: the Raspberry won’t even start if no SD-card is present.

It has no built-in Wi-Fi hardware but can plug in any WLAN dongle that Linux can use. And because you have a proper Linux underneath the hood, you can also connect a lot of other devices, including Bluetooth, 3G, TV tuners, etc., you name it.

Another point to consider is that the Apple TV has been designed to have all its connectors in the back. The Raspberry Pi has connectors on all sides. If you plug in a network or USB and an audio cable in addition to the power source and the HDMI cables you have wires coming out from all edges. This makes it difficult to find a good spot to place it near the TV set. That the SD-card always peeks out of one side as well doesn’t really make it any better either.

Apple ships its media player with a simple but elegant remote which can control all aspects of the device. It appears to use some proprietary protocol which means it is not possible to use a programmable remote instead. The remote control is also rather small (some might call it ‘elegant’) and tends disappear between the sofa cushions, etc.

Alternatively, it is also possible to use an iPad or iPhone as a smart remote using the Remote App. And one hidden feature: you can program the AppleTV to recognize certain remote control commands, compensating for missing CEC support. This is rather complicated to configure, though.

On the Raspberry, while not shipped with a remote, there is of course always the possibility to use USB remote controls and wireless keyboards.

If your TV supports the CEC standard (most modern ones do), it is even possible to use the TV remote to control the media center.

CEC has been branded differently by different TV manufacturers. Samsung calls it “Anynet+”, Sharp “Aquos Link”, Sony “BRAVIA Link” and “BRAVIA Sync”, Philips “Easy Link” and so on. In my case, both my Samsung TV control the Raspberry with no problems. This does away with the need for an additional remote control. I consider this a plus for the Raspberry.

Of course, there are also Apps to remote control XBMC for iOS and Android available, and finally, you can even connect to the device with any web browser and control certain (not all!) aspects via the web interface.

Apple TV is designed from the core to integrate into the Apple infrastructure. If you have a MacOS X or iOS device (read: iPhone, iPad) it creates the interface to your “big screen” and can even mirror or extend the other device’s screen to your TV set. This also applies to movies, like, you can open a YouTube video on your iPhone but actually watch the video on your TV. Apple TV also connects to your iTunes account, which means that you can buy or borrow a movie from your iPhone and then watch it via the Apple TV.

Also the XBMC software can be used for Video mirroring from your Apple device. It can also stream videos from network shares play media files from an USB stick.

There is an enormous amount of Add-Ons for pretty much any kind of use available. It would take to long to list them all, but there if you want to integrate a media player system to your existing infrastructure, the Raspi is your friend.

Apple TV comes pre-installed with a handful of apps. That’s it. No way to install any others. In fact, with newer generations of the hardware Apple seems to have managed to close all the former loopholes that allowed add your own software (which is why these older versions are now much sought after).

Most of the apps Apple offers appear to be rather US centric – stuff like Hulu, HBO and even a baseball channel. Of course there is also a YouTube channel and Flickr, but that’s pretty much it.

For my purposes, I was missing an app giving access to the BBC iPlayer and its German counterpart, the “Mediathek”. But that’s probably just me…

Choice is where XBMC really flexes its muscles: there are almost one hundred “Add-Ons” for video sources alone in the standard repository. On top of that there are also other repositories, and you can still install an Add-On directly, for example from a USB stick, if necessary. This covers almost anything except for pay-for channels and movie rental services. There is even an Apple video trailers Add-On for XBMC…

Apple TV has a built-in 6 W power adapter, the makers of the Raspberry Pi recommend at least a 700 mA 5V power adapter, which translates into 3,5 W. All clear then? Far from it! The power specs are actually set for the “worst-case” scenario, when the media player is working hard to deliver high definition video. Most of the time, the device is in standby and will drain substantially less power.

Neither of the two devices can be “properly” switched off, but the Apple TV at least goes to standby after a certain time of inactivity, the Raspberry will dim down the image and probably puts some circuits to sleep, but the external power adapter will continue to draw power.

Even worse: since there is no easy way to switch the Raspberry Pi back on (short of unplugging and plugging back in), it is very tempting to simply keep it running all the time.

I could not actually test the real power consumption of the two devices, but I would estimate that Apple has the nose ahead in this category.

Advantage: Raspberry Pi (though not as much as you may have expected)

If you have concerns about setting up a device that requires a bit of tinkering and prefer one that is ready to plug and play out of the box, Apple TV is the clear winner. Also if you are exclusively using the Apple infrastructure with iTunes and iOS devices, or if you are only looking for an easy way to bring rented movies onto your TV screen – again, Apple TV should be your choice.

Practically everybody else should consider a Raspberry Pi. It has more features, is more flexible, can be expanded and customized to quite some extend and last but not least is also a bit cheaper.

In fact, it is an amazing piece of hard and software working together, extremely impressive!

XBMC can not hold all its promises, though: live TV streams were not working in any of my tests, some functions are still a bit wobbly and with 1080p there is a risk of buffering pauses.

If XBMC continues to be developed as now, I have little doubt that this will improve. Even now, I definitely stick to my Raspi as a “smart TV hub”.